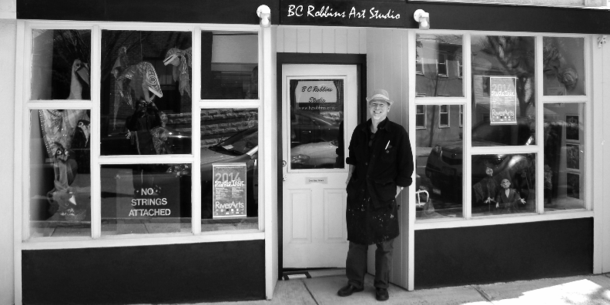 Bruce Christopher Robbins is an artist and teacher who works in whatever medium seems best suited for the project being explored.  With an equal passion for the visual and performing arts, puppetry became a way to investigate and combine his many interests.

Bruce received his BFA from SUNY Purchase in 1986.  His work explored the combination of puppets, video and environments that resulted in multimedia performance.  He then had an artist studio in Port Chester, NY for six years where he continued his creative ventures. His work led him to being an artist-in-residence at various schools where he created and implemented interdisciplinary projects involving puppetry. At this time he also was hired to perform for audiences ranging from parties for kids to adults at local nightclubs.

In 1990 he was hired by The Masters School in Dobbs Ferry as technical director of the Claudia Boettcher Theater.  Here he was responsible for the sets, lighting, make-up and costume design for numerous productions. He taught classes in stagecraft, intro to acting, as well as video production and puppetry.  During this time he worked on over seventy-five productions.    In 1995 he took an original multimedia puppet show for adults on the road and performed his one-man show in Italy and Germany at puppet festivals.

For the past fourteen years he has been teaching middle school students in the visual arts department.  With his guidance, students explore drawing, painting, sculpture, photography and puppetry. His work with puppets has been woven into many interdisciplinary projects with his colleagues and students over the years. He has also been sharing his passion for puppetry with students at RiverArts Camp for kids in resent summer sessions.  When not with his students he enjoys developing and working on his own personal creative projects.

His creative process with puppets often begins with the hands-on creation of an object, then discovering its character through movement explorations.  He will then work toward finding its’ voice if it seems to have something to say.  Improvisation and child-like play is key at this stage of character discovery. This can then lead to the creation of a short skit.  A script and storyboard might then be developed into a production to be shared with others.  This process is not the only way he works but it does free up his imagination when feeling creatively blocked.

In February of 2014 he rented a little storefront in Dobbs Ferry to use as his studio. He welcomes you to see some of the many puppets and projects he has developed over the years as well as take a fun hands-on introductory class in puppetry for adults.